Jonestown and the Anti-cult Movement

The anti-cult movement became a much more respected and powerful force in society in Jonestown’s wake, as the threat from “cults” was hyped as a real, present and mortal danger. After the CIA sounded its mysterious night-time alert about “mass suicide” at Jonestown, the anti-cult movement’s leading luminaries, some of whom had backgrounds in military mind control research, were thrust into the media spotlight as “experts” to “explain” what had happened in Jonestown. They played a major role in shaping the popular “mass suicide” Kool-Aid narrative that endures to this day.

The first on the scene to do this was psychiatrist Dr Hardat Sukhdeo. He began explaining his “mass suicide” findings only a few hours after he touched down in the city of Georgetown, without having actually visited the crime scene in the jungle. His assertions were in direct contradiction to the clinical evidence amassed by Dr. Mootoo who had extensively studied the scene and concluded murder was the cause of most deaths. Dr Sukhdeo’s claims were then echoed by anti-cult activists Dr Louis Jolyon West and Dr Margaret Singer in the US, who frequently appeared as media “experts”. It was drummed in that the Jonestown community was under the direct mind control of Jim Jones and committed suicide without resistance.

It was the clinical psychologist Margaret Singer who popularised the notion that new religious movements “brainwash” people after undertaking mind control research in an Army medical centre in the 1950s. She made a career out of appearing as a paid expert witness in court cases pushing mind control theories, until her theories were resoundingly rejected for lacking evidence and substance. 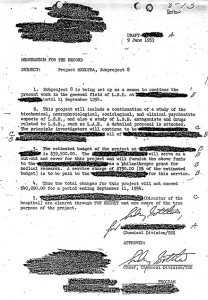 Singer was an anti-cult colleague of the infamous psychiatrist Louis Jolyon West, who was also involved in military mind control research. He also appeared as a media expert pushing the mass suicide/religious mind control narrative. West had a shady past in CIA mind control experiments. He received CIA funding for MK-ULTRA experiments in “Psychophysiological Studies of Hypnosis and Suggestibility”. He is also famous for injecting an elephant with massive quantities of LSD, and causing its death. After MK-ULTRA came under scrutiny, Dr West was involved in the aforementioned proposal to develop a remote “behaviour modification” research centre on a missile base, where human experimentation would involve “psychotropic drugs, electric shock and chemical castration”, being considered around the time the Peoples Temple moved to a remote jungle location in Guyana. Dr West was also interested in remotely controlling human behaviour by computer through electric shocks.

Why was the threat of being brainwashed by religious “cults” being hyped by people directly involved in government mind control research?

After apparently shutting down MK-ULTRA, the CIA had claimed that their mind control program had been a failure. Dr Sidney Gottlieb, who headed MK-ULTRA and plotted assassinations for the CIA, has said on record that his decades of mind control work for the agency was “useless”. Whether it really was a failure is impossible to confirm; after all, they destroyed most of the evidence. But if the CIA’s story is taken at face value – that the agency was unable to control people’s minds when it had virtually unlimited funds, secrecy, top scientists, drugs, sophisticated technology, and electroshock “therapy” at its disposal – how was it plausible to also claim that leaders of small, poorly resourced, spiritual groups with no scientific expertise were able to? How could leaders of small religious groups have the power and sophistication to perform mind control when the US government supposedly could not?

The premise is absurd and – given that some of the key “anti-cult” players who made these claims were directly connected to government mind control projects – also highly suspicious.

The Anti-Cult Movement, Deprogramming and MK-ULTRA

As the threat of religious cults was hyped in the aftermath of the Jonestown tragedy, the anti-cult movement had a ready solution to combat this apparent threat: “deprogramming”.

The methods employed in “deprogramming” were not dissimilar to MK-ULTRA. A person could be kidnapped, isolated and confined against their will, and berated and harassed to coerce them to change their beliefs. In some cases, more severe methods were used on the victim, such as violence, sleep deprivation and – in extreme cases – rape.

Deprogramming became a lucrative business for some anti-cult practitioners from the 70s onwards, who charged hefty fees for their deprogramming “services” which at times contravened the law, not to mention the rights and freedom of the individuals targeted. It ultimately led to this controversial practice being discontinued.

Were the similarities between deprogramming and MK-ULTRA experiments just a coincidence? Did the apparent termination of MK-ULTRA, which had funded mind control researchers, in some way contribute to the rise of the anti-cult movement, in which mind control researchers found a new funding stream? Or could it be the case, as Holsinger and others have asserted, that MK-ULTRA experimentation actually secretly and directly shifted from prisons and medical institutions to so-called “religious cults”?

If the Peoples Temple really was used for government medical experiments as some believe, one would expect to find links between it and figures and institutions linked to mind control research and the anti-cult movement. And indeed, there are some peculiar links.

The “sociopath” Jim Jones had been a patient attending the Langley-Porter Neuropsychiatric Institute in San Francisco during the 1960s and 70s. This institute is known to have conducted classified experiments for the Defense Department’s Advanced Research Projects Agency (DARPA). According to Jim Hougan, some of those DARPA experiments involved “electromagnetic effects and behavioral modification techniques involving a wide variety of stimuli—including hypnosis-from-a-distance”. The institute’s director believed in the military potential of Extremely Low Frequency (ELF) radiation which he said is theoretically “capable of shutting off the brain (and) killing everyone in l0 thousand square miles or larger target area.”

Strangely, the majority of Jonestown survivors were also treated at the Langley-Porter Institute, upon the request of San Francisco Mayor George Moscone, just before he was assassinated nine days after the Jonestown massacre. This institute also happened to play host to anti-cult psychologist Margaret Singer.

This is not the only peculiar connection between Jonestown and the anti-cult movement. Oddly enough, when it was just starting out, the Peoples Temple acquired its first church, a former synagogue, in Indianapolis in 1956 on “remarkably generous terms” from Rabbi Maurice Davis who became a leading figure of the anti-cult movement, an occasional “deprogrammer” and an associate of Dr. Hardat Sukhdeo, who kicked off the mass suicide narrative in Guyana. It was the building’s former use in Indianapolis as a synagogue that inspired the group’s name, “Peoples Temple”.