Posted by: The Conscious Reporter in Cultural Conditioning, Uncategorized May 5, 2016 7 Comments 8,874 Views

Myth and metaphor play an important role in constructing our culture and creating purpose in our lives.  They are tools that help the subconscious mind to digest the happenings of a world that is too complex for our five senses alone.  The poet uses these tools to arouse you. The screenwriter uses them to amuse you. 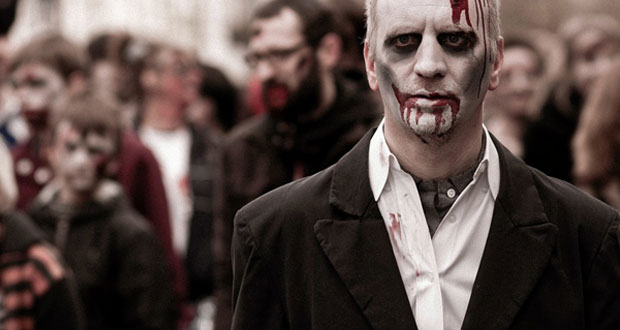 When we hear tales of Homer and his Odyssey we also receive cues we need to uncover the strength and perseverance required to face personal challenges.  When we follow Ahab on his journey against the white whale, we are shown, in metaphor, the perils of our own intensely burning fires of vengeance and obsession, and thus warned on a deep level of the folly of allowing one’s lowest nature to dominate the higher self.

But, well beyond the tales of Ahab and Homer, we have today the widespread proliferation of the modern Zombie tale, the prevailing metaphor for our times.

A Zombie is an animated corpse.  A walking, un-dead lunatic.  A former person, now devoid of the qualities we all know as explicitly human, such as compassion, logic, love, awareness, self-preservation and so on.  The Zombie is soulless animated human cadaver inhabited only by some of our lowest capacities and cravings.  A Zombie drools and spits, mindlessly walking into peril with absolute disregard.  Robotically driven to cannibalize and feast on the living, the Zombie is only capable of committing acts of violence or acts of stupidity.  The Zombie is born of witchcraft, chemistry or disease and is hopelessly beyond reform.  A Zombie is nearly unconscious.  Hypnotized.  Dumb.  Deadly.

So what is it about this myth that makes it so resonant in today’s world?   Why do more people show up for Zombie make believe night in the local park than show up to an anti-war rally?  What does the myth of the mindlessly violent zombie invasion tell us about ourselves?

1.  Nearly Unconscious Plebs on the Loose

Human consciousness is variable.  A child is aware only of his immediate needs and surroundings, while the wise old sage is considerate of the self, plant and animal life, and even the cosmos above.  But the majority of so-called adults operate within a state of awareness that rarely breaches the boundaries of their personal worlds.

We witness today a massive disconnect between our desires and the effects of those desires.  On a micro level, most are wholly engrossed in personal dramas, portable devices and the satiation of cravings.  For the greater world, carved up by tribalism and nationalism, and managed by conflicting interests, it is clear that, en masse, people are wildly unaware of the interdependence and interconnectedness of all life on planet Earth.

Record numbers of people, including children, regularly take medications andmind-altering pharmaceuticals for one reason or another.  And if you don’t have a prescription, you still receive hefty doses of this garbage from our contaminated water supplies and from food produced with contaminated ingredients.  These drugs pollute the natural faculties of the mind and alter one’s personality, often making one numb to the emotional realities of life.

Television, for many, is an all day/all night affair.  It doesn’t matter if you watch The Discovery Channel or Jerry Springer, the brain reacts the same; by slipping into a low alpha state, growing groggy and slow, mushy, suggestible and reptilian.   The effects of watching programming on the boob tube are dastardly mind numbing.

We are also a heavily poisoned society and there seems to be no reprieve in sight for the degradation of our environment.  GMO’s, nuclear power, vaccines, water fluoridation, depleted uranium, chemtrails, arrogant oil barons and a grotesque addiction to plastics, are all signs that our respect for life is near zilch.  Living in a world so stressed out by toxicity can feel like being dead already.  And this course is a guaranteed death sentence for all, given sufficient time.

Individuality is being erased as more and more people succumb to the hypnotic indulgences of a poisoned, consumer driven, media controlled way of life.  Group think is at an all time high in America, and watching people cheer and whinny by the thousands over a political campaign or a sporting match is like nervously watching the advance of a drooling Zombie army.

Hypnotic and entranced, far too many people follow orders and obey ridiculous rules, laws and regulations.  Observing an airport security line is a fine example.  Does Grandma really need to be felt up to ensure a safe flight?  Of course not, but the TSA agent was told to do so, and the people witnessing were told to do nothing about it and so a passerby from a sane universe might have to wonder what nefarious witch’s spell is making all these people carry on so mindlessly with such humiliating affairs.

Even the means by which most of us earn our daily bread has become so mundane and automatic that we might as well be Zombies. The trek to the office, spending most of the day and most of the week performing tasks and tricks for someone else.  The neck-ties, the 401k’s, 4% annual raises, company handbooks, pee-in-a-cup exams and all that.  We have been trained, or be-crooked, into defining our selves and self-worth by our jobs, belying our natural human tendency to desire freedom and individualism.

From the top down, our society is trained to resolve issues with violence.  The government leads the way and sets the tone by forcing upon us a punitive system where all infractions are punishable by fines, imprisonment, death, or worse.  Even something as benign as selling raw milk can result in an armed police raid.  And with the modernization of warfare and a bottomless public budget for fancy tools of death, there really is no end to the government’s capacity to kill and destroy.  We are all in the cross hairs now.

And as above, so below, as the populous is whipped into a frenzy of cage fights, random street beatings, school massacres, drug wars and road rages.  Our preferred sources of entertainment masterfully and ceaselessly plant these powerful auto-suggestions into our minds.  Creativity in violence is the order of the day.

5.  Every Cannibal for Himself

It is evident that millions upon millions of Americans are stocking up in preparation of a societal collapse scenario.  Fine enough, but sadly, the emphasis is broadly on self-defense rather than community defense, or better yet, community prosperity.  People have somehow concluded that if everyone else is dead, things will be all right.

Even pre-collapse, we see how citizens are already turning against each other in thought and deed.  People are falling victim to the fearful suggestions of a police state, submitting more and more readily to the notion that to be safe one must do harm to others.  Now, we are even being prodded to report suspicious ‘activities’ to uniformed ‘authorities’ and obey every dehumanizing order given from the dropout, riot-cop enforcement class, no matter how degrading.

Societal reinforcement of a popular myth is an indication that said story strikes a resonant chord with the many, containing widely felt truths.  In this way, our greatest and most told legends and myths reveal to us the contents of our collective subconscious mind, the things that otherwise may be too awkward, too misunderstood or too obvious to express literally.

So by looking at the ugliest qualities in our world with an eye for awareness and conscious resolution, while remaining open to the warnings contained in our popular myths and metaphors, we give ourselves the crucial opportunity to improve. 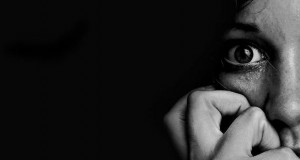