The All-Seeing Eye: Modern Use of a Hijacked Symbol

The all-seeing eye is a symbol of divine omniscience or sinister influence depending on how it is used. In this second article tracing the history of this symbol we will delve into its use over the last 200 + years which takes this pristine positive symbol to its increasingly malevolent use and implications. 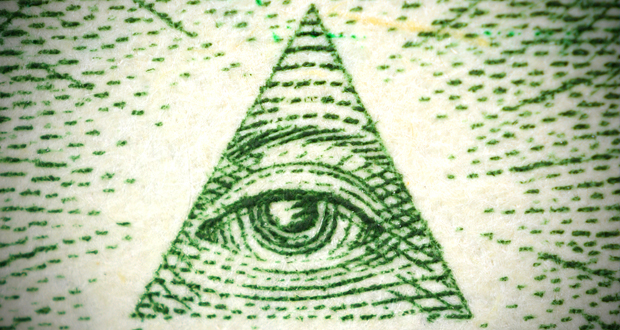 In my previous article The All-Seeing Eye: Sacred Origins of a Hijacked Symbol, I outlined how the all-seeing eye was an integral part of many ancient cultures and traditions, and originally represented divine providence, spiritual truth and awakening.

The closer we get to modern times however, a shift takes place in the way this symbol is used and perceived. The once pristine and positive symbol becomes emblematic of elitist totalitarian oppression, surveillance, demonic influence and control.

Since I wrote the first part of this article I found another positive use of the all-seeing eye from the early 17th century. The frontispiece to the book The History of the World by Sir Walter Raleigh from the year 1614 includes the image of an eye with a glory shining around it and then surrounded by cloud with the word “Providentia” written above it and with the eye overlooking the globe. The use of the word providentia points to respect for the beneficial qualities of foresight and understanding, which the eye here must be representing in this context.

The eye-in-pyramid symbol was used in the design of the reserve side of the Great Seal of America. The eye pyramid design in the seal was added by Pierre Eugene du Simitiere who worked as an artistic consultant in the first of three design committees for the project which culminated in the adoption of the Great Seal by Congress in 1782. 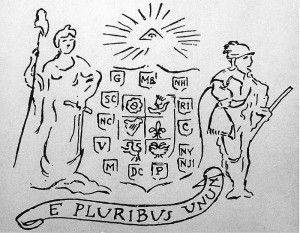 So what did the eye-in-pyramid symbol mean for the founding fathers of America, many of whom it is well known had ties to Freemasonry? Is it just borrowing the Eye of God or Eye of Providence from Christianity? Or rather since masons built the cathedrals did they give the symbol to Christianity, a symbol they secretly used until made public in 1797 in Thomas Smith Webb’s publication The Freemason’s Monitor? Is it also a depiction of awakening the third eye?

I think for them it is mainly a symbol for God and perhaps for any who were mystics, for awakening the third eye. The use of it seems to be for good, wholesome reasons as reflected in the great ideals expressed in the USA’s Declaration of Independence. Their hopes were for America to be the first land of the free, with all men created equal with certain unalienable rights, governed by the people, for the people, independent from England and the monarchy; and for them a new order of the ages with the providence of God having provided for this opportunity and approving of its establishment.

When Webb placed the all-seeing eye in The Freemason’s Monitor he described it as follows: “[A]nd although our thoughts, words and actions, may be hidden from the eyes of man, yet that All-Seeing Eye, whom the Sun, Moon and Stars obey, and under whose watchful care even comets perform their stupendous revolutions, pervades the inmost recesses of the human heart, will reward us according to our merits.” So this shows Freemasons started publicly using the symbol to mean the same as it had in Christianity and more ancient cultures. 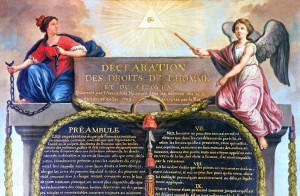 ugust 1789 the Declaration of the Rights of Man and of the Citizen was adopted by France’s National Constituent Assembly and is an important document in the history of the French Revolution and in establishing human rights.  There are a number of Masonic symbols used in the artistic representation of this declaration made in 1789 by Jean-Jacques-François Le Barbier including the classic eye in pyramid symbol at the top used in an apparently positive way.

It was in 1934 that the Great Seal all-seeing eye was placed on the US one dollar bill by President Franklin D. Roosevelt, a known 32nd degree Mason. He did so at the suggestion of another 32nd degree Mason, Henry Wallace, who was the Secretary of Agriculture and future Vice President (1940-44). 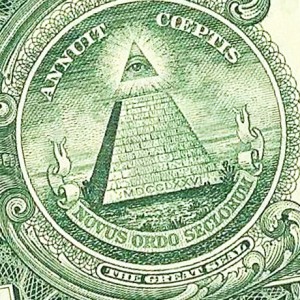 The Federal Reserve had taken control of America’s currency since 1913, so the placement of the all-seeing eye symbol with the Latin words for “New World Order” (Novus Ordo Seclorum) and “He has blessed our beginning” (Annuit Coeptis) on the one dollar note is perhaps used by them to symbolically represent their consolidation of power and control as a small top elite group separated from the rest of society.

From this time it could be said that the all-seeing eye symbol was inverted from its original sacred origins since it was used on the dollar bill, a key mechanism of control, especially since it became the world currency post WW2.

“Permit me to issue and control the money of a nation and I care not who makes the laws.” Mayer Amschel Rothschild, 1790

Today the use of the all-seeing eye has absolutely exploded in modern media, art, entertainment, and the corporate world.

The all-seeing eye symbol has been used in government agency logos such as DARPA’s Information Awareness Office — with obvious overtones of surveillance and being under Big Brother’s watchful eye. Also Mi5 in the UK uses the pyramid with the letter i of their name appearing at the top of the pyramid.

There are also numerous other examples of all-seeing eye motifs appearing in company logos e.g. AOL, and even space missions by the military e.g. NROL 39. Seeing these enterprises using what is regarded as dark Illuminati symbolism makes one think that these organisations may be under a sinister influence.

The examples above are just a small sampling of the use of the all-seeing eye in corporate logos.

There are some strange appearances of all-seeing eyes connected with the World Trade Center.

There was the Oculus Mosaic at the Chambers St/WTC subway station installed in 1998, and the 9/11 memorial in which a line of people formed the shape of an all-seeing eye. 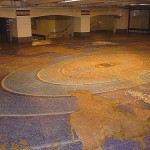 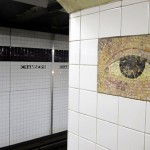 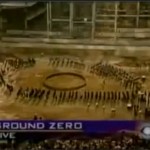 In modern pop culture the symbol has become ubiquitous. All-seeing eyes are everywhere these days in fashion, promotion pictures of pop stars, movies, beauty products, and even kid’s cartoons which all frequently incorporate only one eye. Does this reflect the increasing control that elites have held over the entertainment industry as time has gone on? 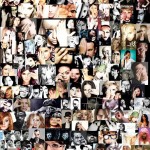 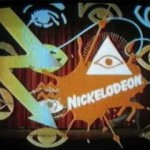 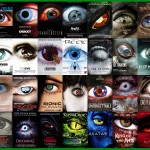 Some suspect the all-seeing eye to be a symbol related to Illuminati mind control over their music and film stars.

Could the Eye of Sauron in The Lord of the Rings and the triumph of the good standing up against evil perhaps be taken as a warning against the Elites and encouragement from Tolkien for the little people to do something about it?

The symbol has turned up in some major spectacles seen by millions around the world such as the 2012 London Olympics ceremonies, the 2012 Superbowl half time performance by Madonna, and bizarrely in the lead up to the 2013 New Year’s Eve celebrations in Sydney.

The main lights in the shape of pyramids with the lights at the top (a bit like the eye-in-pyramid symbol) all around the stadium amongst many other symbols are part of what some have described as a public Illuminati occult ritual with lots of Illuminati symbolism e.g. fireworks forming an eye and the fire torch poles forming an eye. The mascots were a bit strange also.

A ring of pyramids surrounds a giant eye – Image Source

During the 2012 Madonna Superbowl halftime show which some regard as a giant Illuminati ritual, an eye suddenly formed from lights projected onto the stage floor in a performance riddled with dark use of symbols. 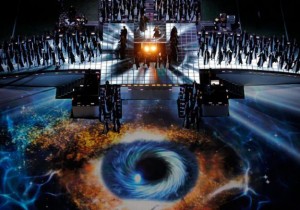 Building up to this event in Sydney, there were weird promotional artworks in newspapers and on banners hanging around the city depicting single eyes on trees and on animals such as koalas. Then at the peak of the New Year’s Eve celebrations and fireworks where each year a secret symbol is finally revealed on the middle of the Sydney Harbour Bridge, this time it was an all-seeing 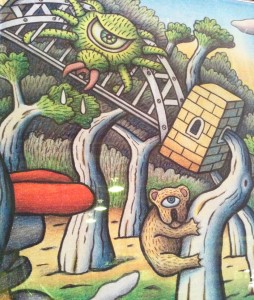 eye! Keep in mind, this is in the backdrop of recent Snowden revelations about the true extent of surveillance the world population is under, which made many people take notice of this symbol, but of course in a negative way, with some seeing it as a sign of Illuminati/demonic influence. 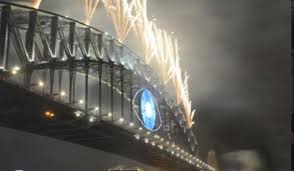 Why does it matter if a group displays some symbols publicly?

Symbols are powerful. As the all-seeing eye symbol has entered more into pop culture it has made the idea of an elite Illuminati more widely speculated about. Now, when someone sees an all-seeing eye it is more likely to be viewed as a symbol of a powerful, controlling, all-knowing (surveillance) elite, thus what was once a benevolent symbol of the creator watching over the world has now been hijacked by a dark agenda and turned into a sinister symbol of control. Just look at the evil, one-eyed venom dripping spider dominating Sydney’s famous harbour icon for example.

Is this display of dark symbolism in pop culture a form of predictive programming, to get the masses (particularly young people) used to seeing these inverted symbols and accepting them, and conditioning them for something in the future?

As we have seen through this article, the all-seeing eye was for thousands of years a symbol of the light, protection from evil, and a benevolent God watching over creation. 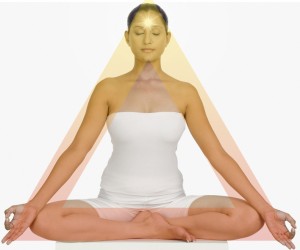 It can also symbolise a person’s own inner divine spark and spiritual insight. It is interesting to note that when a person is in a sitting meditation position the body forms a sort of triangle shape with their 3rd eye chakra near the apex. When a person meditates they are silencing the dualistic mind and reaching a peaceful state of oneness or “single-eyed-ness” you could say, and gaining spiritual insight.

Overtime though, this symbol has been corrupted and co-opted into the opposite: evil power and control, big brother watching, an elite 1% separated from the majority of humanity at the top of their pyramid.

I believe we need to speak out and defend our freedoms against the dark agendas at play, including taking back the symbols of positive spirituality from the darkness that is corrupting them, and use them again in their rightful context.

[You can see my interview with Total View on this topic here: Total View interview: All-seeing Eye-Modern Use of a Hijacked Symbol]
all seeing eye esoteric symbols illuminati 2014-09-15
DavidH

David Hayes has had a long interest in spirituality and the nature of reality and what makes people the way they are. In coming to learn more about the hidden agendas to suppress and control humanity, he has a keen interest in helping to shine a light on such things so that others can learn more too in the hope for a brighter better future.