The Transhumanism Trap: Why Biohacking Chains Consciousness to the Material World

Can technology help humanity realise its full potential? Transhumanists see the merging of man and machine as a natural “next step” in human evolution, but where does consciousness fall in the equation? Instead of bringing freedom, merging ourselves with technology could chain consciousness to the physical body and material world, overriding our natural capacity for spiritual evolution. The search for expanded states of consciousness is part of the human experience. With technology developing at a breakneck pace, people are increasingly interested in how to best “hack” their daily life for enhanced productivity, emotional satisfaction, and even physical well being. Transhumanism, or the belief that humans can use technology to evolve past their current limited physical and mental experience of life, presents an interesting question on the subject of consciousness: can technology lead us to higher states of consciousness, or is it just the opposite — a weight dragging us back into the heaviness of the material world?

Proponents of transhumanism say that humans are clearly still in the early stages of our evolution, and the next logical step forward includes using all available technologies to evolve (humans in transition or transhumanism). There’s even the potential for us to become human beings that are so radically different from ordinary folk as to deserve the title “post humans”.

This idea of human transformation is not new — there are traditions stretching back centuries dealing with how to reach the heightened state of consciousness known as enlightenment, how to attain eternal life, and how to live a transcendent existence.

So how does one transcend the pain, problems, and general clunkiness of ordinary life in the physical world? Technology offers undeniable help in day-to-day functioning, but is it enough to actually transform the human race?

Modern biohackers, also known as “grinders”, like Amal Graafstra, have found ways to develop what you might call extrasensory perceptions, akin to a sixth sense. This isn’t something like intuition or clairvoyance however; these sixth senses require implants to extend the capabilities of the human body. Whether using RFID technology to open doors, unlock a laptop, or even perceive the location of true north, Graafstra believes that embeddable tech is the next step in human evolution. He even started his own company, Dangerous Things, which allows people to order DIY implants, ready for injection, so they can experiment with embeddable tech on themselves.


From Human to Transhuman

Is the step from ordinary person to enhanced transhuman inevitable? We seem to be going in that direction, given some of the latest technological strides which blur the lines between humans and machines. 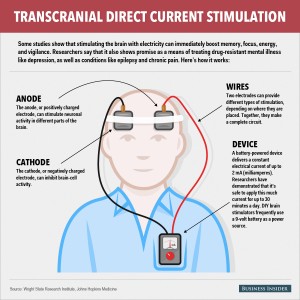 Brain implants already exist to help patients with Parkinson’s disease control body tremors and patients with epilepsy monitor seizure activity. But what if a brain implant could enhance your current physical capabilities, rather than mitigate a health issue?

A treatment called TDCS (Transcranial Direct Current Stimulation) involves strapping electrical nodes to your head and receiving a small zap of electricity to the brain. The outcome? Proponents cite memory stimulation, reduction of anxiety and brain fogginess, and enhanced ability to solve problems.

There’s also a recent University of Barcelona study delving into a sort of telepathic email transmission. Researchers have successfully sent brain-to-brain (B2B) thought transmissions between human subjects in India, Spain and France. By strapping on electroencephalography (EEG) headsets which detected the brainwaves from the transmitter, the thoughts were able to be received via the internet to the headset of the receiver, and then electrically transmitted directly to the receiver’s brain.

The company MicroCHIPS is developing a contraceptive microchip that can be implanted under the skin. This cutting-edge device is capable of storing 16 years worth of birth control which is dispensed daily in a woman’s body, and is capable of being turned “on” and “off” remotely, depending on whether she wishes to conceive. Proponents cite convenience in family planning, not having to remember to take a pill, and not needing to have the device removed for 16 years, unlike other forms of contraception currently in the market which last for only 5 years.

Football fans can now track all the game day movements of their favourite players. The NFL, in conjunction with Zebra Technologies, is rolling out real-time location systems (RTLS) in 17 stadiums this year. This will allow RFID chips placed in player’s shoulder pads to transmit an unprecedented level of real-time data about their speed, acceleration, and distance run. One has to wonder if it’s only a matter of time before the RFID chips make their way from player’s uniforms into their bodies.


Is Tech Shrinking or Expanding our Consciousness?

Wearable or implantable tech and transhumanism are quite loaded subjects and raise many ethical questions, along with valid concerns about privacy and safety (hackers tampering with other’s embedded medical devices comes to mind). While being able to unlock doors with the wave of your hand or swallow a pill full of medical nanobots may sound attractive to some, it’s worth considering whether these technologies are giving us more freedom, or less.

A key tenet of transhumanist philosophy is the ability to transform our normal, mundane human experience into an enhanced, even radically different way of life. The goal is to be transformed through the use of technology — biohacking your way to a new you, as it were.

Could humanity be searching for transformed existence in an erroneous way? There are no guarantees that completely revamping your material existence will bring lasting happiness for example, and some people display sixth-sense type heightened abilities like clairvoyance or clairaudience without the use of tech implants.

For instance, if we want to feel energised and mentally clear without the need for a battery and electrical nodes we could implement the ancient practice of awareness of the present moment in daily life. Or for those who want to really push the limits of human existence and safely explore what happens after death, astral projection is a viable option. 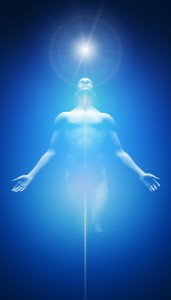 While there isn’t an exact point-for-point correlation between the claimed enhancements biohacking offers and the potentials that exist by developing human consciousness spiritually, the premise is very similar: exalting the human condition and surpassing the limitations of the physical senses and body.

With spiritual development however, there is no reliance on an additional chip, machine, or electrode to reach profound knowledge and heightened states of being, because consciousness is not bound by the limits of the physical body. As an added bonus, unlike modern technology, no one can remove or steal the knowledge we gain from awakening, and we’re even in a much better position to recognize and deal with those who would try to manipulate us physically or mentally when we have expanded consciousness.

The body is impermanent and will eventually die, but consciousness continues after death. This is explained in many spiritual traditions and revealed in phenomena like Near-Death Experiences (NDEs). The level of consciousness we attain in life through spiritual awakening continues when our body is no more, as consciousness itself evolves through awakening, not the body – which is just a temporary vehicle for it. While spiritual awakening sets consciousness free from the limitations of the body and the five senses, depending on a body integrated with technology for evolution and heightened perception only serves to further bind our existence and perception to the the transient material realm, which is only a small part of our existence, and has a definitive end. Furthermore, altering the body with technology could interfere with our natural capacity to use our time in the physical world to awaken consciousness.

In much the same way as our hyper-connectedness can hinder spiritual development, over-reliance on technology has the potential to keep our consciousness firmly bound to the material world, only capable of interpreting information gleaned from the five senses. This is not to say technology in itself is bad, or that we should stop our pursuit of future technologies. It would just be a shame to confuse biohacking with the opportunity to truly evolve through awakening consciousness. The generation of children growing up right now immersed in technology, not knowing anything else, could easily think the only way to experience an enhanced life is through physically augmenting oneself. But non-physical spiritual evolution, through direct contact and knowledge of the divine, will trump material progress every time.

Dara Hayes has a long-held interest in esoteric spirituality and ETs, and a strong wish for alternative spiritual subjects to remain visible and freely accessible to people all over the world. She writes and creates graphics for The Conscious Reporter, and occasionally posts spiritually-themed graphics on ReachingLight.com.